Colbert cannibalized by liberals for joke using Asians: The thought police always turn on its own

Dutiful liberal Stephen Colbert decided to wade into the Washington Redskins debate by making a joke on air and over Twitter, which has now highlighted quite nicely where you end up when you follow that worldview to its logical conclusion: the land of livid thought police.

Colbert’s tweet — “I am willing to show #Asian community I care by introducing the Ching-Chong Ding-Dong Foundation for Sensitivity to Orientals or Whatever.” — sparked the ire of our old friend Suey “only white people can be racist” Park, and now #CancelCobert is trending on Twitter. Sadly, Mr. Colbert, for some weird reason, still doesn’t understand that his own ideology breeds intellectual cannibals. Conservatives have the same problem, but the difference between a liberal and a conservative is that the conservative doesn’t want an all-power federal government — and the weapons at its disposal — filled with thought police. The conservative just wants to be left alone.

Suey Park and her “allies”? They want power and control. 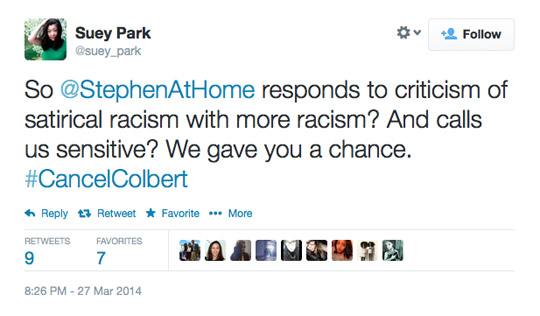 But the great thing about Suey Park feminists is that they never miss an opportunity  to burn bridges. Disagree with them and you’re not an “ally,” which means that although her venom is typically spewed towards white people, she has a way of also turning off fellow Asians, black people, and any other minority who isn’t a political radical. 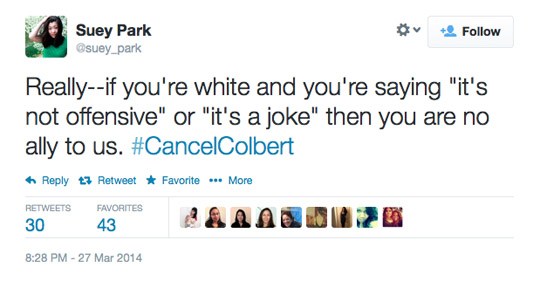 Poor Haichi only wants to fight real racists. I guess he’s not one of Suey’s allies.

Ditto for Oliver. It looks like his eyes are starting to open. Keep going, Oliver! Suey Park is the face of liberalism, and it is totalitarian at its core. 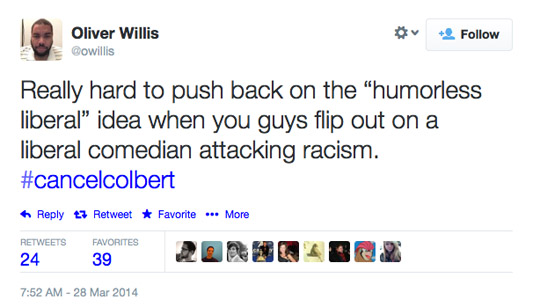 Don’t believe me? Look at her feed. Suey Park and her fellow leftists are angry and they have no intention of engaging in civil discourse. Due to her scorched earth campaigns, which take out large numbers of people she needs in order to build a real movement, she is mostly relegated to throwing online temper tantrums that go nowhere. News outlets get the clicks, the marketing department is happy, and Suey gets to feel as though she did something productive for “the cause.” That said, you can see that the seeds of violence are there. In the right political climate — if a perfect political storm occurs — people like her sometimes come to power.

For a good example of what happens when raving socialists get control of the wheel, see Venezuela. 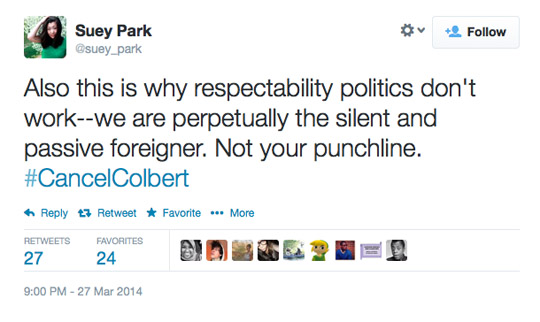 Ultimately, Stephen Colbert will survive professionally. The left likes him too much to ever make him pay for any transgression he might be guilty of in the eyes of its fringe elements. Bill Maher also knows this all too well. Given that, I believe the best way to take advantage of this moment is to reach out to your independent (but left-leaning) friends and family, and explain to them how those who claim to be the most “tolerant” among us are, in fact, totalitarians in training.

Update: Suey Park recently went on Huffington Post Live and demonstrated just how self-destructive her worldview is. She can’t even go on a show with two liberal men for over five minutes without ensuring that they’ll never want anything to do with her again, if possible.