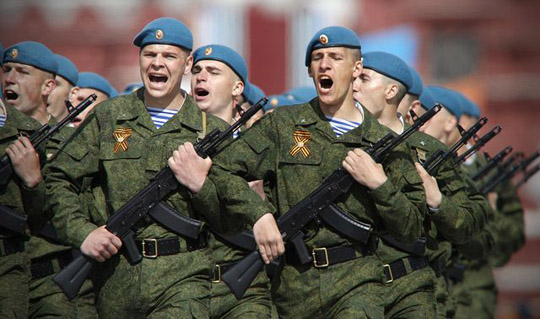 Say you’re Russian President Vladimir Putin. You rolled your tanks in to Crimea, snatched it up, and all that really happened were some angry press conferences by representatives of western nations. You took yourself a nice warm-water port, you’ve expanded your sphere of influence, and the only real pain you received came from some economic sanctions put together on the fly by President Obama and the gang. John Kerry got a little flustered. So what. You know that Mr. Obama pulled a Gwyneth Paltrow and “unconsciously uncoupled” himself from foreign affairs long ago.

The question then becomes not whether or not you will go for more inside Ukraine, but why on earth you wouldn’t. That’s why U.S. intelligence believes that an invasion is likely (not a hard assessment to make when there are suddenly 30,000 troops amassed along Ukraine’s border), and so does NATO.

Russian forces have been concentrated for possible offensive action on the borders of Ukraine, in vast numbers and in a high state of readiness, according to U.S. Air Force Gen. Philip Breedlove, NATO’s Supreme Allied Commander Europe. In a series of military maneuvers on the Ukrainian border, Russian paratroopers (the VDV corps) and the air force have been preparing to spearhead a possible push deep into Ukraine. …

If Putin decides to send in his troops, he has a narrow window in which to act. …

Ukraine has scheduled a national presidential election for May 25 that may further legitimize the regime the Kremlin hates and wants to overthrow. The Kremlin may find it hard to resist the temptation to attack Ukraine and “liberate” the south and east while Russia is ready, the Ukrainian military weak, and the regime in Kiev unstable. Such a move could lead to more Western sanctions, but this risk maybe dwarfed by the vision of a major geostrategic victory seemingly at hand.

Imagine a scenario where Putin takes another chunk of Ukraine and then when things get particularly bloody he throws up his hands and says, “Okay, I’ll play nice if you do away with the sanctions.” Does anyone think the West would not capitulate? Does anyone think bureaucrats would not jump at the opportunity to stop the violence, pat themselves on the back for their efforts and declare a win for “diplomacy” — all while conveniently ignoring the massive shift in power orchestrated by Putin?

Take a look at Syria: The Obama administration told the world Bashar Hafez al-Assad had to go, yada, yada, yada, red lines, red lines, red lines, and then it essentially just morphed into, “Well, maybe if you just turn over your chemical weapons we can work something out.” Syria turned over its rotting old WMD and has been dragging its feet on the rest. Maybe it will turn them over…when it gets around to it. What’s the world going to do about it now? Answer: nothing.

This is what the world looks like when an American president divorces himself from foreign affairs. The problem is exacerbated because for years now Americans have fed from the trough of moral relativism — they’ve willingly slurped down the slop that says, “the values of your founding fathers are no better or worse than the mullahs in Iran or the former KGB agents in Russia or the shirtless Somali warlords with automatic rifles slung over their shoulders while sporting a pair of tuxedo shoes.”

Free nations around the world wanted to see what it would look like if America retreated into its shell and acted as if its destiny paralleled countries like Zaire or Bolivia — and the world got an answer. Will America reverse course or continue on the current trajectory? We know what direction Vladimir Putin is hoping for. What about you?