It’s official. The FBI has released photos and a videotape of two men who are believed to be responsible for the Boston Marathon bombing on Monday, April 15. So now, the real hunt will begin.

What will be forgotten about as time goes by will be the witch hunt that took place beforehand.

First, we have a small sampling of the guys from imgur, who ignored the pleas of fellow users not to play judge, jury and executioner: 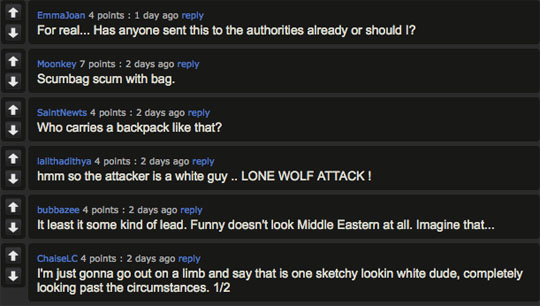 Who carries a backpack like that, anonymous imgur kiddie? A person who knows that when you’re walking in crowded areas with a backpack on that it’s easy for someone to rifle through it and steal your valuables. But you wouldn’t think of that because you’re busy hoping that the terrorist is a white Tea Party voter and a card-carrying member of the NRA.

Want to know who the real “scumbag” is, imgur kiddie? The “scumbag” who looks at a still photo of a man standing in a crowd and is able to come up with all sorts of nasty narratives about who that stranger is and what motivates him.

And why wouldn’t young drones go that route, given that Salon was busy publishing pieces for its readership titled: “Let’s hope the Boston Marathon bomber is a white American.”

“White privilege is knowing that even if the bomber turns out to be white, no one will call for your group to be profiled as terrorists as a result, subjected to special screening or threatened with deportation,” writes author Tim Wise. “White privilege is knowing that if this bomber turns out to be white, the United States government will not bomb whatever corn field or mountain town or stale suburb from which said bomber came, just to ensure that others like him or her don’t get any ideas,” (David Sirota).

Not to be outdone as he vies for the ‘No Shame 2013 Award,’ MSNBC’s Lawrence O’Donnell responded to the terror attack by going into a weird screed against the NRA:

“There are new developments tonight in the bombing investigation here in Boston … But that investigation could be moving faster were it not for the successful lobbying efforts of the National Rifle Association. The NRA’s efforts to guarantee that American mass murderers are the best-equipped mass murders in the world is not limited to murderers who use assault weapons and high-capacity magazines. The NRA is also in the business of helping bombers get away with their crimes…” (Lawrence O’Donnell).

Expect Lawrence O’Donnell to be calling for pressure cooker regulations or bans before the year is out. Remember: If it could save “just one life” it’s worth it…

Finally, we have publications like the NY Post, which are so eager to be the first out of the gate that they’re willing to look like complete morons by sending people after teenage track and field runners. 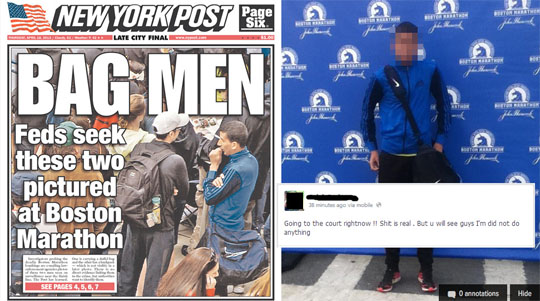 As Deadspin notes: [M]aybe there was a reason for them to be at the marathon, wearing track jackets and carrying bags: they’re runners.

“The kid in the blue jacket is a middle-distance runner at Revere High School. Last week he ran the two-mile in 11:20. [He’s] training for either global jihad or a track meet.”

In the age of 24 hour cable news and Twitter everyone feels as though they have to say something — now. They have to react immediately. They’re impulsive. They have no patience, and they’re so partisan that only moments after a horrific tragedy they’re penning pieces on “white privilege.” God forbid someone’s Twitter feed gets dialed down a notch until law enforcement agencies actually give users something to tweet about.

I hope and pray that I never have to experience a terrorist attack up close and personal, but if I do I can assure you that I won’t be wondering if the person I’m applying CPR to is a Muslim or a Catholic, and atheist or an agnostic. And I promise that I won’t ask them if they voted for President Obama or Mitt Romney.

These are sad times we live in. Sad times indeed.

Update: The suspects have been identified and a manhunt is underway.