CO Democrat Rep. Joe Salazar: Women are too emotional and stupid to use a gun

The gun control issue just won’t go away. When it isn’t Vice President Biden trying to make the case for gun control by telling all of us to buy shotguns, it’s a university broadcasting a new way to avoid being raped: menstruation.

February’s winner (and by ‘winner’ I mean ‘loser’) for his ability to continue the gun-control distraction (we are almost $17 trillion in debt) is Colorado Rep. Joe Salazar. In one fell swoop he manages to let women know that he thinks they’re all a bunch of emotional basket cases that can’t be trusted to carry a firearm, and that they’re too stupid to know when they’re being physically assaulted.

Unlike the University of Colorado, Colorado Springs, Mr. Salazar does not openly support projectile vomiting and sudden urination as a deterrent to rape. He’s a big fan of whistles and “safe zones” (because as everyone knows, rapists abide by the same “safe zone” rules once used in elementary school during games of freeze tag).

Question: If Salazar’s last name was Akin and he had an “R” next to his name, what are the chances that his rape statements would be aired around the clock on MSNBC and CNN? Given that Marco Rubio taking a sip of water was replayed over 200 times on MSNBC alone, I’d say the chances are pretty good. But because Rep. Salazar has a “D” next to his name, those same “news” outlets will work overtime at ignoring the story. Sadly, the average American only thinks about media bias in terms of what is actually reported, without ever factoring into the equation what is left unsaid.

Luckily, with the invention of Twitter, Facebook, YouTube and blogs (like this one), it is a lot harder for partisan media hacks to ignore the stories that don’t conform to their particular word view.

In response to Mr. Salazar’s desire to create of safe-zone call-box utopia for whistle-carrying paranoid women, the hashtag #LiberalTips2AvoidRape began trending on Twitter. Oddly enough, the people making fun of politicians whose policies would endanger more women found themselves being attacked … by women.

Someone needs to tell Anna O’Hara that she needs to save that puke for the next time she’s approached by a rapist. Semi-automatic and automatic vomit (with three-round burst capability) is currently legal in all 50 states.

Luckily, the feed was also filled with sanity: 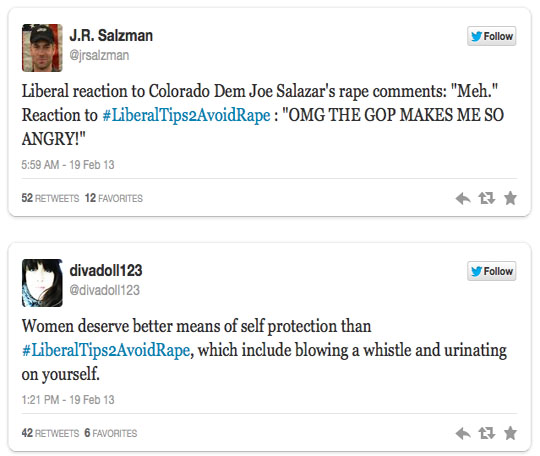 Indeed. Women do deserve better. Men deserve better. The country deserves better. But we’re stuck with an electorate that spends most of its free time watching Harlem Shake videos on YouTube or kittens on Buzzfeed. Every four years voters memorize a few talking points given to them by whatever cable news channel host they like, and then they pretend they’re policy experts before voting for a stooge who has lived in Washington, DC his entire life.

Have fun with your safe-zone call boxes, my gun-control favoring friends. I’m not sure how long it takes to rape someone, but I’m hoping the campus security segway isn’t low on battery when you push the distress signal. When seconds count, the scooter patrol will be minutes away.