Samuel L. Jackson to Robert Downey Jr. circa 2008: I hope you die in a hurricane

Samuel L. Jackson has a habit of proving that just because someone has a lot of money, it doesn’t mean that they’re happy. In fact, it seems as though there’s a positive correlation between the money that lines Jackson’s pockets and how angry he gets in public. With the success of The Avengers, he’s now wishing that Hurricane Isaac had slammed into the Republican National Convention. 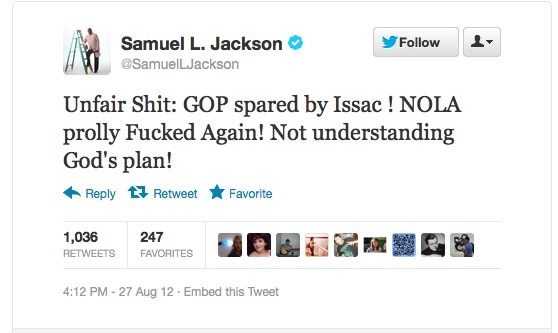 Apparently, “God’s plan” would have made sense to Jackson if a hurricane smashed into Tampa Bay and washed a whole slew of dead and bloated GOP bodies out to sea. It tells you a lot about the man’s psyche that he would publish such a thing, and even more about the kind of followers he attracts (apparently wishing watery death and destruction upon political opponents is a ‘favorite’ among 247 of Jackson’s followers).

Here’s one for you, Sam: Maybe God’s plan was to show the world that people like you exist. Perhaps He wanted to remind us that sad, angry and bitter men who lash out with profanity-laced tirades when they disagree with someone are out there. Maybe God’s plan was to show us how immature, intellectually lazy Hollywood stars react to the political process, so that the rest of us might find a way to have a more reasonable discourse. Just a thought.

And speaking of things to think about, perhaps we should return to the question of Robert Downey Jr.’s politics. People have been confused about where Downey falls on the political spectrum, due primarily to comments he once made to the New York Times (i.e., he learned lessons in prison that are incompatible with liberalism), his attendance at the 2008 GOP convention, and his 2012 political donation to the Obama campaign. As I said in May:

When Hollywood liberals start attacking the man, it sends up red flags to the world that they have him on notice: Shut up and keep quiet, “re-educate” yourself, or the character assassination will continue. Now that Downey has given up cold, hard cash to Obama, is he still a materialist? Probably not, since once liberals “evolve” their past is forgotten about.

The Avengers is an ensemble cast — and we’ll assume that all of them are Democrats. After having witnessed the kind of vitriol that “Avengers” like Samuel L. Jackson fling at conservative Americans, is it that far fetched to wonder if Downey — again, who attended the 2008 GOP convention — might have made a calculated decision to shuffle on over into the Democrat’s tent? What if Marvel’s Tony Stark was down in Tampa right now? Would Samuel L. Jackson still have tweeted the same thing? If so, it would have made some of the interactions on the set of The Avengers 2 rather awkward.

With that said, take a moment to imagine the reaction if a Hollywood star of Jackson’s caliber — a white one — had sent out a similar tweet about the Democratic National Convention. What do you think the job prospects for that actor would be over the next few years? What kind of scripts (if any) would show up on their doorstep? Unlike questions that pertain to “God’s plan,” we don’t need Divine Intervention to figure that one out.

I don’t know what God’s plan is for you, Mr. Jackson, but I know that I don’t go around wishing you would die. I’ll say a little prayer for you tonight, simply because deep down I think you’re probably not really that mean of a guy. You’re probably just stupid.