Janeane Garofalo and Rosie O’Donnell recently discussed Elizabeth Hasselbeck, calling her “anti-intellectual.” I’m not going to defend Elizabeth on this one because I do have to question the faculties of anyone who would willingly choose to sit next to Joy Behar on a daily basis. And I don’t want to comment on Rosie O’Donnell at length because she makes public policy arguments in haiku…so there’s really not much else I need to say.

However, I do have to wonder: What makes Janeane Garofalo an “intellectual”? Why should anyone listen to “The Bowler” from Mystery Men? Why should anyone listen to “The Wench” from Cable Guy? It’s interesting how strong the correlation is between how bitter and angry a liberal Hollywood actor is and how seriously they’re taken by other liberal cable news anchors. But here’s the little secret that Janeane doesn’t want you to know: If she says “neo-con” enough times (even though she has no clue what that means) her fellow faux-intellectuals will welcome her into the club (e.g., Keith Olbermann).

Janeane tells Rosie that conservatives operate on “false premises”, which is weird since conservatives are the ones who acknowledge that man is fallible–that the “warped timbre of humanity” is a given. Conservatives believe that free markets can harness man’s inherent self-interest and redirect or steer those impulses in ways that benefit society. Liberals, like Janeane, call people dumb racist rednecks, while asserting that only the “intellectuals” (i.e., liberals) like her can save us.

Ms. Garofalo and O’Donnell don’t get conservatism because the moral pedestal they built is too high to step off without getting hurt. When coupled with the moral relativism favored by the left the result is that Bush = Hitler and Teaparty = Racists. Hollywood dolts are so busy demonizing anyone who disagrees with them that they can’t see a real threat when weapons grade enriched uranium falls from its mouth during the weekly kill-all-the-Jews speech.

Now if you’ll excuse me, I have the Magnum PI intro to watch. 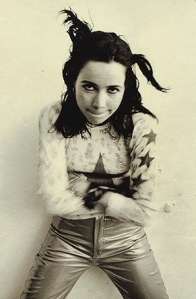